This tour brings new challenges to the performers during Covid-19. For starters, we are masked or if not, at a great distance from the audience. We are out-of-doors working with each different site, aware of how actions, gestures and objects can be understood in many contexts (also with weather changes!)

Both Mathieu Léger and Linda Rae Dornan explored several of their performances, continually developing and refining each work. INvited artists, Xavier Gould and Samuel Landry, and Emily Saab redid their performances in two venues, adapting them to each environment; Marika Drolet-Ferguson’s solo work was only performed once.

The tour began on Saturday, October 24, after a two-week hiatus due to being Code Orange in Zone 1 and Zone 5 in New Brunswick. The first performance was in Sackville, hosted by Struts Gallery & Faucet Media Arts Centre. Both Mathieu and Linda presented two short performances each, outdoors, in the strip parking lot across from the gallery.

Linda commenced with It Could be Anyone’s, a performance carrying hundreds of wooden alphabet letters in a large sheer voile bag. After making parallel chalk lines on the tarmac she stood within two lines holding the bag tightly to her chest for several minutes. Then turning to the right, she rubbed out a section of a chalk line (as if creating a doorway) and entered the next space. Holding the bag, she faced the audience again. It was an awkward bag of shifting wood letters which she held in various positions for the next 15 minutes as she made doorways to each new space, then stood still and silent holding the bag of unformed words. Carrying one’s language with you? Many languages, a new language in each space? Language as worth holding, one’s own or n’importe quel langue, whatever weight. This work was developed more in Saint John, sponsored by Third Space Gallery at the Saint John Arts Centre. This time, Dornan carried the bag of letters (words, language) in her arms and on her back as she slowly walked around the periphery of the Arts Centre building, pausing regularly to tighten her hold on the large bag, shift its position in her arms, and feel its weight. The last position, on her back, resembled the carrying of a dead weight or possibly, the willing carrying of a loved one. 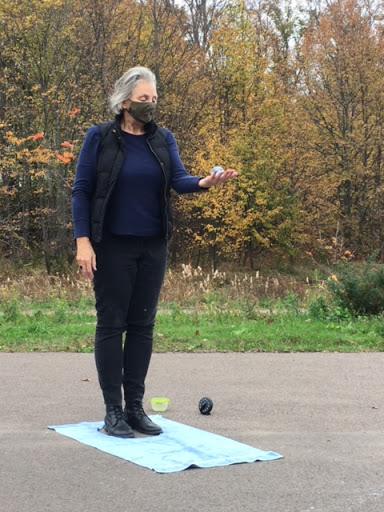 
Dornan’s second performance in Sackville was more attuned with the human effects on the environment, called, Breath, Melt. She unrolled a blue towel with a cutout circle at one end in which she stood. Her mask also had a hole over the mouth, covered in clear plastic so you could see her rhythmic breathing. With a blue globe of ice in her palm, she held it out to the audience. As the globe started to melt, she would tip the excess water onto the towel. Her body heat melted the ice here, as human activity causes global warming, global weather changes, and northern ice melt. The rhythmic breathing was likened to the earth’s cycles. This performance was reworked several times in the course of the tour developing into bare feet, one foot covered with salt, the other with sugar, loud inhales and exhales, and the melting ice globe dripping onto the white commercial resources her feet were encased in.

Mathieu Leger’s performances have their own finely paced rhythms, often unhurried and contemplative. With his first one of the tour, untitled, he laid out a marble board (6 x 12 inches approximately), with a clove of garlic and a pencil with sharpener. He sharpened the pencil, lifted one end of the board and balanced it on the graphite tip of the pencil. He then peeled the garlic clove and placed it under the board. Delving into his bag of supplies, he pulled out a thin cord which he carefully tied to the base of the pencil. Placing the end of the cord between his teeth, he slowly backed up and tightened the cord before pulling it hard, collapsing the marble onto the garlic. When the marble was lifted, the garlic was smashed and edible, which Léger did. This performance developed more suspense during the course of the tour, as he would back up with the string in his mouth, leaning down, waiting before pulling the string and we held our breath each time!

In Léger’s second performance, untitled, he arranged a paper bag, a round of Brie, a container of toothpicks, a flower bouquet and a 20 kg bag of Windsor salt in front of him. In measured steps, he held up the salt bag, then dropped it. Cutting it open, he poured everything out into a large mound of white salt. He held up the unwrapped round of Brie cheese (the package read “Le President”) then unwrapped it. Reaching into the paper bag, his hand was covered in charcoal powder which he rubbed into the Brie before placing it on top of the salt pyramid. He then unpacked the bouquet of a white lily and a red rose. After planting the lily in the centre of the Brie, he cut the flower head off with his army knife, then trimmed the rose stem, took a toothpick and attached the red rose stem onto the lily stem. Each action was methodical, first showing the flower, placing it, gazing at it, cutting the flower off its stem.

La fleur de lys is a stylized lily used as a decorative design or symbol of the French monarchy or France. In Léger’s performance, he uses a live lily as representing the french language with the red rose symbolizing the english language. With each successive cut of a stem, then the forced attachment of the other flower, the languages are successively attached, hybridized, placed in a hierarchy, possibly growing together. Finally, Leger placed the red rose in his mouth, then chomped it so that it fell apart to the ground. English is a second language learnt, maybe imposed—spoken well, enjoyed, useful and necessary for survival.

Each of these performances were reworked and further developed over the course of the tour. Elements were added, subtracted, and timing was refined with sites also influencing the presentations.

Posted by Performance Writing at 05:10