In a new performance the next day, Exchange, Dornan held a wrapped canvas package closely to her chest, standing within the Aberdeen Centre’s gardens. Placing the package in front of her on one of the sidewalks, she gently unwrapped it revealing black earth from her own garden. She placed her hands on the soil, sensing it, before lifting a handful and distributing the soil with care and attention within the garden. This was repeated many times until all the soil was given back to the earth. She then began to pick up found garbage within the flower beds and grass. Items were left in the oil cloth, eventually wrapped up and taken away. Cigarette butts, a ping pong ball, a broken cell phone cover, a pencil, plastic, plastic, a chip bag, a battery and so on... A gesture of care, a gift of awareness to the earth. The anthropologist Mary Douglas said dirt is “matter out of place.” There was an exchange here, a gift of good soil/dirt for the out-of-place human detritus thrown on the Centre’s grounds. 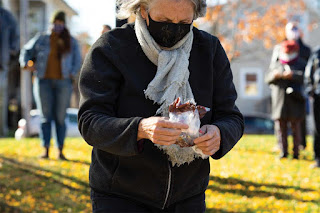 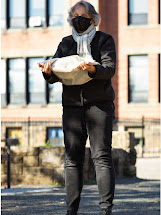 Léger re-imagined his untitled white lily and red rose performance on the grass. Léger creates aesthetically beautiful scenes revealing underlying meanings with quirky gestures. One is never quite sure what will happen next. He repeated the language performance with the salt pyramid, the charcoaled cheese round and the white lily/red rose, only with a slower pace and another flower layer (the lily) left pinned on top of the hybrid stalks. Lily to rose to lily. Léger owns each space he performs in using slow actions, meaningful gestures and evocative imagery. 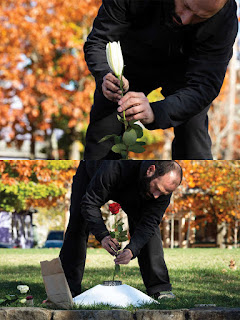 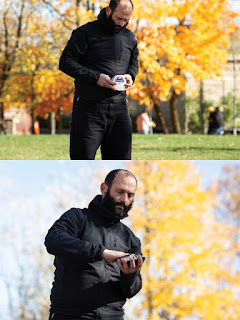 The third performance of the day was by Xavier Gould and Samuel Landry. Both artists from Moncton, they walked into the central courtyard of the Aberdeen Centre in full makeup and clothing, dressed as drag queen stars, and struck poses. Dance music blared. Landry lit a cigarette. They changed poses and stared outwards, waiting as if at the bus stop, a most normal activity. They owned their space, insisting on being seen and accepted before eventually walking back into the Aberdeen Centre. Stand and be seen—we are part of you. This was their first foray into performance art— this striking a living tableau for a short time. There are a plurality of realities existing in our society, and Gould and Landry, in this performance, demand the recognition and acceptance of queer and trans bodies within the Acadian community as well as the broader Canadian one. It was a politically pointed, proud and courageous action. This performance was repeated in Bouctouche as well. 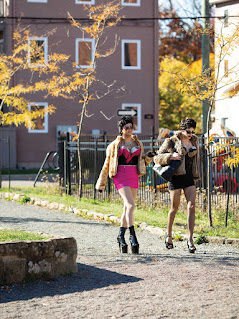 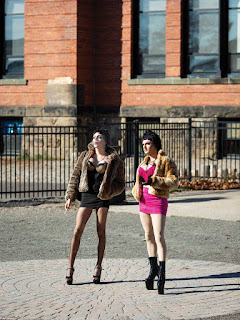 Emily Saab, an emerging artist from Saint John, joined PERFform 21 in Saint Andrews and Saint John. Her performance, untitled, was an exquisite measure of time. Wearing a sleeveless black dress, Saab sat at the outdoor table and calmly removed her jewellry (earrings, rings and necklace), placing them in a small bowl. Standing up, she moved over to where she had placed a large jar of dried herbs and a foam gardening kneeler. Kneeling on the foam, she lowered the top half of the dress, rested for a moment then opened the jar. She quietly reached over and lifted some of the dried herbs, gently crushing them within her hands before washing her arms, neck and face with them. This was repeated again and again with calm, rhythmic and ritualistic gestures, pulling us in the sensory and emotive world. When finished, she replaced the jar lid, pulled up her dress top, stood and walked away. Her pacing and gestures were evocative of something close to her heart and in the discussion following the event, Saab referenced her grandmother’s garden and her drying of herbs, as well as her continuing connection to her. The jar of herbs is in fact from her grandmother. In Saab’s quiet gestures, body memories surfaced within us, this touch to touch, scents released—from her grandmother’s growing and drying herbs to Saab’s rubbing them onto her skin, creating an alive connection from memories. 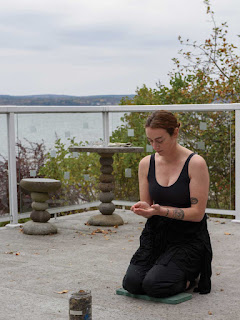 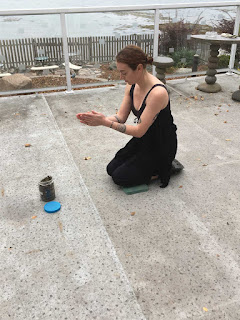 Posted by Performance Writing at 12:53