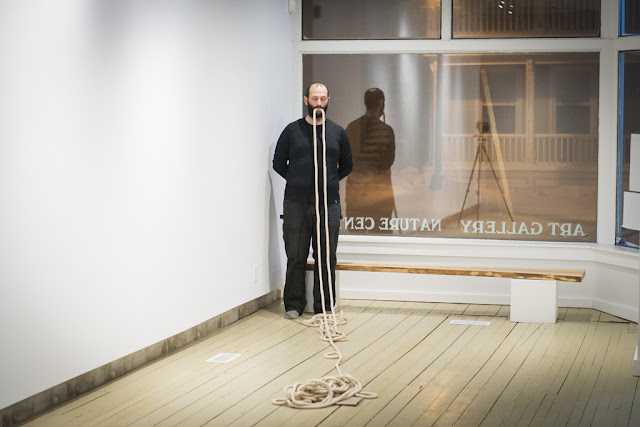 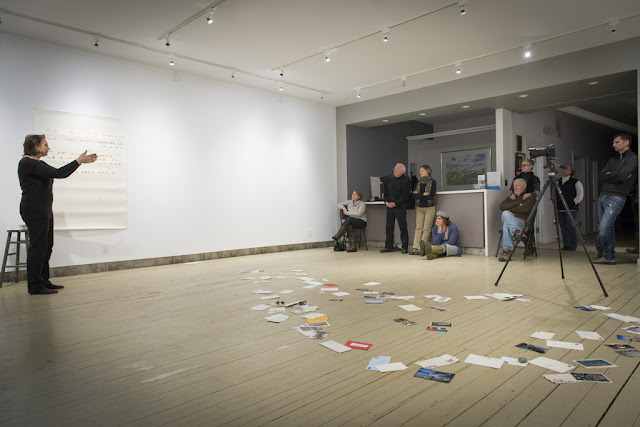 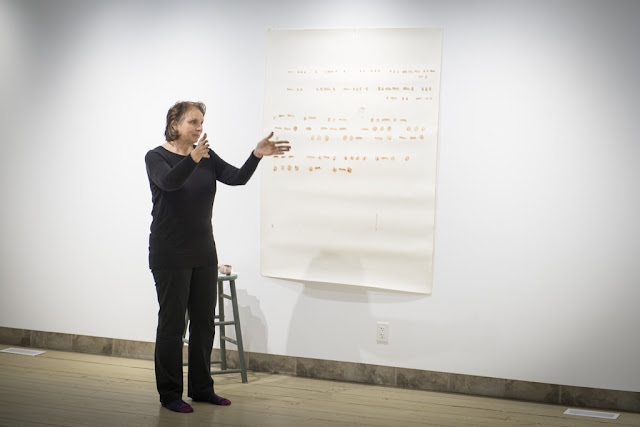 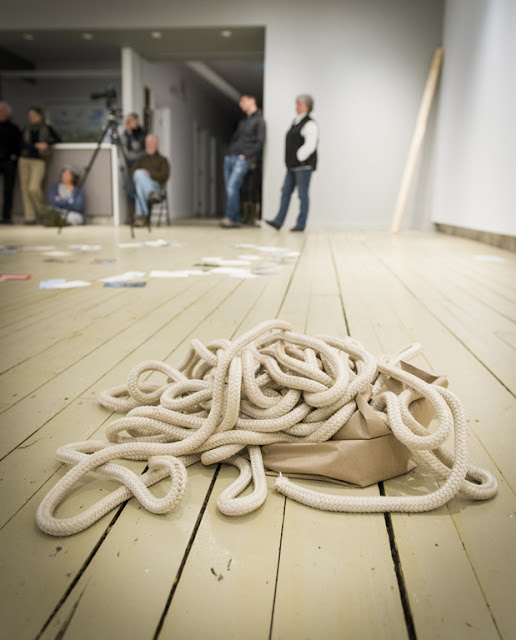 We arrived in Saint Andrews in perfect weather. By 4:30 pm it was a snow storm; light snow and lots of it. Mathieu and I met the director of Sunbury Shores, Sharon McGladdery, set up for the evening performances, then settled in to our hotel.

I have been thinking about the element of work evident in each of our pieces. I am not referring solely to the creation and development of a performance but to the actions themselves: Mathieu’s hand-grinding of charcoal and trimming of wood, my fabric cutting, repetitive actions and hand signals. Yes, our labours can be entertaining as well as meaningful, also messy and sometimes troubling; this doesn’t change the physical work ethic evident in each piece. That work ethic has its own political awareness embedded within it. An awareness of our place within the circle of wood production in the province for example or a heightened awareness of the fragility of the natural world. Paying close attention in the intensity of this tour has brought layers of meaning/understanding to the surface.

The Q&A was very rich in Saint Andrews. An observant point was about my letter performance. The audience member suggested that it could be a letting go of the past before moving on with life...I had been focussing on the remembering of hand writing and of personal connection before the present digital culture. So yes, that view is now tucked into the performance’s meanings.

The new space for Third Space Tiers Espace is in the downtown core, shared with ArtsLink. It was the smallest space we have performed in yet, intimate.
Emily Saab is the Director and she helpfully set up the space for us. It was a good audience, the back row standing on their chairs to see our actions. Mathieu reprised the charcoal and tissue performance, and continued with the 2x4 work. The 2x4, as it becomes more carved out, has changed its tune so to speak. Mathieu plays it for sound and in Saint John, it sounded marvelous. I extended my chocolate tongue work building on the previous actions of revealing the embedded objects by placing them on my tongue. The thought floated up that I am glad I am past the stage of self-consciousness, of looking unattractive or silly, etc. The action needed is the action performed, vanity be damned.

Again, the Q&A was invigorating. One young woman’s comment about Mathieu’s charcoal work was a fresh perception suggesting the cleaning of his charcoal covered hands with the tissues, or the transfer of guilt to the tissues, charcoal being a polluter. Charcoal is also used to clean/filter, and write/communicate/make art. It was a perceptive observation.

As each evening of performance ends we both have realized that there is a need for more discussion/exchange in the arts, as evidenced by the enthusiasm of our audiences—and a need for the unconventional, and for art with meaning.
Posted by PERFform at 09:56

The drive to Campbellton had clear roads and iced trees after the ice storm last week. It is definitely winter there, with lots of snow, compared to SE New Brunswick. Galerie Restigouche is a large space, an ex-National Exhibition Centre, with a gift shop at the entrance. We unloaded our gear and spent some time getting the feel of the space, moving chairs and re-thinking our performances as there were paintings on all the walls. I didn’t continue with the morse code performance which requires my own large paper hung on a wall. Instead, I developed an older work which has been on my mind, the Cat Symphony, for the space—ten minutes of vocalizing cat sounds and then improvising with them. Mathieu did two new performance works as well. As yet, we haven’t specifically titled the performances, so I will continue to describe them only.

Mathieu’s first performance was a dance of lights between two flexible lamps, travelling from wall plug to wall plug around the periphery of the darkened space. It was lyrical, rhythmical and gently mystical watching the lights blend, separate and overlap on the ceiling, walls and floor as they moved around the gallery. It used the space beautifully in a variety of light patterns which soothed as they also introduced a sensual approach to performance. Was it a night sky performance or a reminder of...? The peaceful sense of it fed some archaic space in my soul.

His second work was a series of actions focussed on speech and writing, including first chewing then slowly dripping black charcoal onto cheese cloth from his mouth, hollowing a circle of yellow alphabet pasta on the carpet with the word ESPACE spelled in the middle, taping a plumb-line to his mouth until it fell heavily to the floor and setting the sight of a compass. Mathieu's actions were methodical and dedicated to an inner vision of place and language. This performance was more conceptual to some of the audience who needed to discuss its meanings and make the connections. Mathieu is a generous speaker, answering any question in depth and with patience.

In this digital age, handwriting seems to be disappearing as we keyboard everything to communicate. My first performance of the evening was a contemplation on a life’s history of letter writing (of being a pen pal from age thirteen with family and friends), and on the importance of material culture. With letters and post cards I placed favourite stones, found feathers, and other natural objects saved over the years on the floor. It could be a memory piece, a work of loss or an affirmation of a way of living and perceiving where each letter is a cherished story written specifically to the receiver; as each found object traces a connection to, and awareness of, a place, time and maybe, a remembered bird.

We have found that the Question & Answer period after each of the performances are lively and engaging. In Campbellton, this continued quite energetically as the audience replied with questions and their impressions. Several of the audience wanted to respond to me during the Cat Symphony but their social inhibitions stopped them. Since I had stared people in the eye trying to communicate for the first half of the performance, this urge to respond was understandable. Unfortunately, no one felt free enough to transgress (-: or is that participate, by talking back to me. Maybe next time....

Discussing letter writing and the changes in how we send news to each other in the past decade was a lively conversation. Audience members have preferences sometimes, a leaning towards an action close to their hearts maybe or a reflection of who they are. This “time warp” performance of someone laying out their saved handwritten correspondence seemed to stir up connections for people. Tangible, in english and french, was the word used to describe the need to touch, write and be connected in a more personal way.

Ambiguity is an essential element in each of our performances. Both Mathieu and I leave space for possible interpretations and choose not to explain everything in the performance or the spoken explanation. We discuss ideas, possibilities and learn from the audience’s reactions during Q&A, sometimes rethinking a work from these discussions. The tour continues to be inspiring for us as well as our audiences.
[lrd]
Posted by PERFform at 07:17 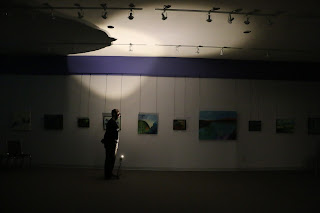 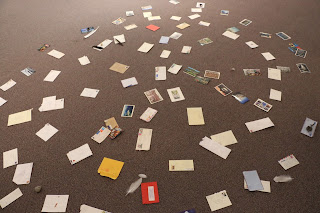